How hard is the water in Surrey? 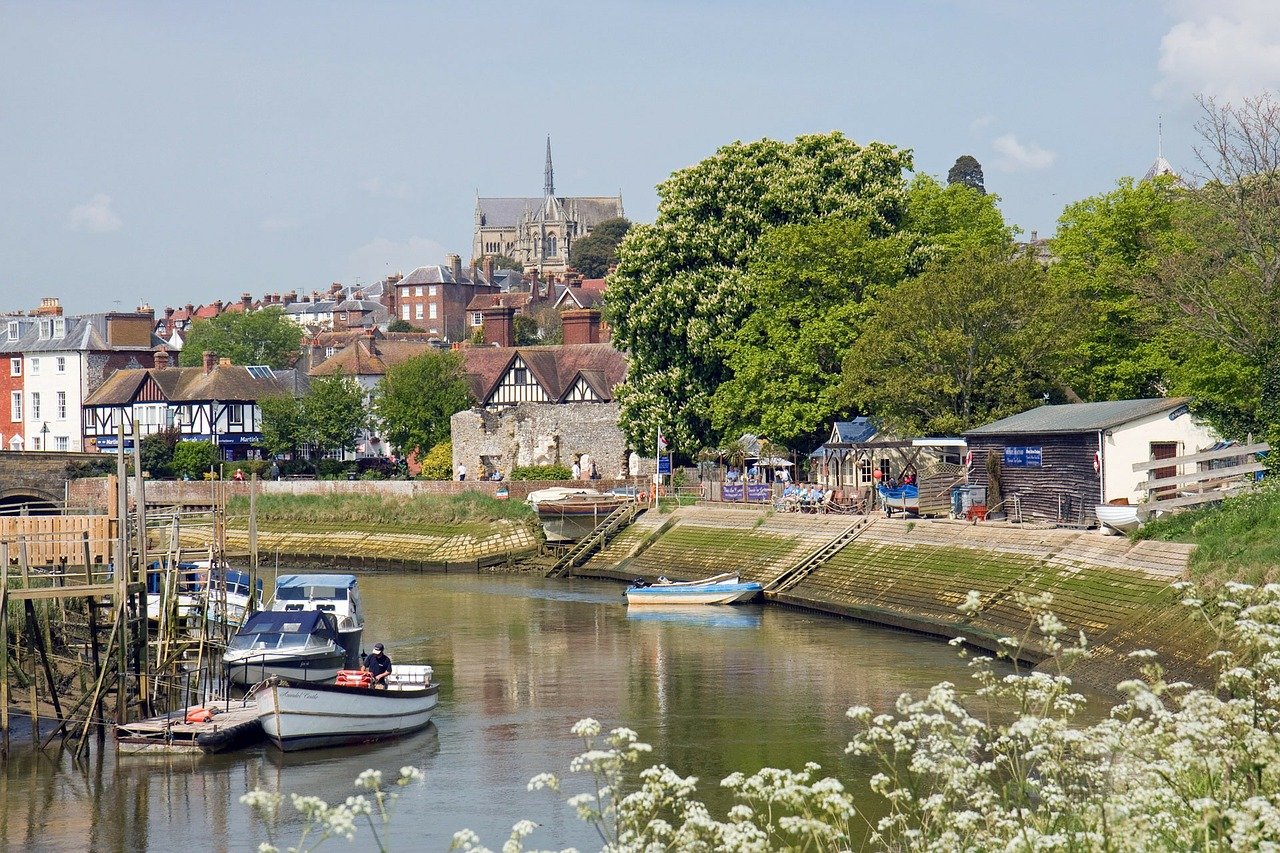 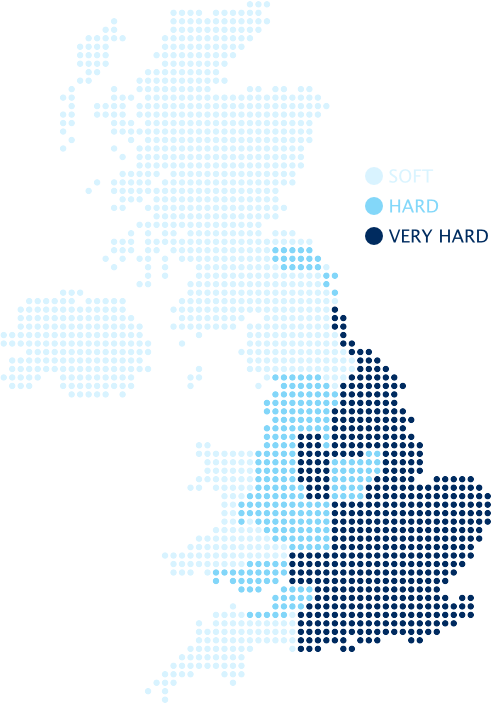 What makes the water in Surrey so hard?

It goes with the territory that the water throughout the county of Surrey is on the hard side. Although it can vary from town to town, village to village even, by and large you’ll find the water hardness measurement is anywhere in the region of 250ppm or even well north of there. PPM stands for parts per million. If a reading is above 200ppm, it is considered hard. At 300ppm you’ll need to be thinking about wearing a tin hat in the shower!

The reason that water in Surrey and the surrounding counties is so hard is because of the soil. It doesn’t start out being hard when it falls as rain. In fact, it’s soft at this point! But once it seeps into the Surrey soil, which is famously chalky and of clay, containing lots of calcium and magnesium minerals, things start to change. These minerals are known for making water hard and this is what flows through your mains supply.

If you don’t want hard water in your home all the time, the best solution is to have a water softener fitted. So, it’s no surprise that Surrey is a county where plenty of householders have splashed out on soft water systems. With a water softener in your property acting as a gatekeeper against hard water, your water hardness level will plummet to virtually zero ppm!

Surrey is an affluent part of South-East England with the highest proportion of woodland of any English county. It has an eastern border with Kent, East Sussex lies to the southeast, West Sussex to the south and Hampshire is situated on its western flank. The population of Surrey is around 1.2 million, making it the 12th-most populous English county.

Although Surrey County Council is currently based in Reigate (since 2021), Guildford is popularly regarded as the county town. Within its boundaries lie four horse racing courses and many top golf courses, including Wentworth and Walton Heath.

Given its close proximity to London, Surrey is full of commuter towns and villages. At one time, Croydon Airport, which opened in 1920, served as the main airport for London, although it was closed in 1959. Meanwhile, Gatwick Airport, which expanded prodigiously throughout the 1950s and 1960s, was actually transferred from Surrey to West Sussex in 1974.

How can I reduce the water hardness in my home?

The most effective way to overcome the drawbacks of hard water is to have a domestic or commercial water softener fitted, in your home or business premises. You may wish to leave your drinking water unsoftened to make it more palatable. It is perfectly possible to filter out your drinking water supply from the rest of your softened mains supply.

What is a water softener and how does it work?

It attaches directly to the mains water supply and works by flushing out the hard water particles. This is done through a process known as “ion exchange” which removes the calcium and magnesium minerals. The high-quality softeners we sell are filled with food-grade resin beads that are dosed with sodium ions. As the water passes through the softener’s tanks, the resin beads attract and hold on to the magnesium and calcium minerals and “exchange” the sodium ions. It is this process which makes the water soft, thereby eliminating any threat of limescale build-up.

Depending on the amount of water you use, your softener will need to regularly “regenerate” to flush away the magnesium and calcium ions on the resin beads. A metering system tells the softener when to regenerate. All you need to do is to make sure the soft water system is replenished with salt, since water softeners require salt to assist with the regeneration process.

The benefits of soft water on your skin, hair and laundry

Soft water will make your skin and hair feel smoother and more silky and you’ll find that your soaps, shampoos and gels go much further.

We know from first-hand experience that skin conditions, like eczema are greatly improved by regular exposure to soft water.

Meanwhile, your laundry will be softer to the touch, the shower screen will stay cleaner and stop looking so stained and your household appliances will run much more efficiently. And you won’t be using up your supplies of Cif or Mr Muscle nearly as fast as you were when you were battling against hard water! 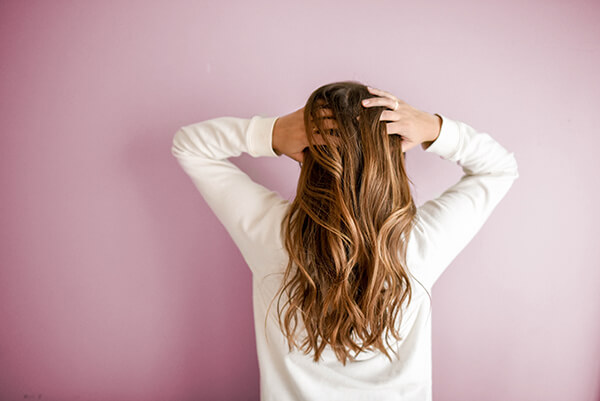 Will a water softener reduce my monthly household bills?

Yes, absolutely! Once you have paid for the initial outlay on the water softener, you’ll start seeing immediate savings on your household bills.

These savings are based on the money that the average family of four will save on shopping and energy bills when a water softener is installed in the home. Working on the basis of a two-bathroom property, the average reduction on general family toiletries and household cleaning products will be in the region of 70%.

In this calculation, we’ve included items such as washing machine and kettle de-scalers, which you wouldn’t need to purchase ever again, once you’ve had a water softener installed. Even if you took out the costs of these sundries, your monthly shopping bill for the above products would fall by around 65% compared to your projected spend without a water softener.

Does a water softener need to be serviced?

To be on the safe side, servicing always makes good sense – for a variety of reasons. Even though, our water softeners are well-built and known for their reliability, designed to last for many years, they work best when well maintained. For this reason, we would always recommend you take out one of our Annual Service Plans.

What does the SJ Water Softeners Annual Service Plan include?

This is a once-yearly health check to ensure your water softener is functioning optimally. We’ll check there are no leaks, that the resin is given a good clean – this is very important – and that everything is on order with the working parts, like the bypass valves and that the overflow is cleared of any blockages.

Being on the annual service plan will not only prolong the life of your water softener, it will also save you any outlay on unexpected maintenance issues.

And you don’t need to be an existing SJ Water Softeners customer to benefit from an Annual Service Plan.

Save money on any parts that need replacing, such as filters – we’ll take £10 off the standard price of a replacement. Plus, we will give you a 10-year warranty on all parts – as opposed to the standard manufacturers’ warranty that you would otherwise receive.

Reduced cost of salt supplies. When we do your yearly Health Check, we’ll stock you with sufficient salt to last until your next annual inspection – saving you money on bulk purchase and on delivery charges.

Throughout the county of Surrey, the mains water and sewerage services are predominantly provided by Thames Water.

What are water hardness levels in Surrey?

Check out how hard the mains water is in your area:

Why is hard water a problem?

We should make it clear that there is nothing inherently harmful about hard water. Indeed, a lot of people like to drink hard water, rather than soft, so we aren’t saying that it doesn’t have its benefits. YET, in most other situations, you really don’t want to be going anywhere near hard water. Why? Because of limescale.

Limescale is produced when hard water molecules become agitated. As examples, you’ll see this happening when you boil or heat your water in household appliances, the central heating, in the dishwasher, washing machine or kettle. This means every time you cook, clean, wash and heat your home, the scourge of hard water is bound to reveal itself.

Whenever you use hard water in your home, scale will create a whole host of problems – any one of which will downgrade your household appliances and cost you money.

The effects of hard water on skin, hair and laundry

Hard water can also be a major issue for our personal hygiene. Regular usage will dry out your skin and it can be especially challenging for anyone who suffers from skin conditions, like eczema psoriasis. Meanwhile, when washed in hard water, hair can start to look lank after shampooing, whilst laundry quickly loses its soft touch and will feel all starchy. The colours in clothing and linen will also gradually become duller with frequent hard water exposure. And the more you clean, the worse the problem gets!

Throughout the course of a year, the average Surrey household without a water softener will face a significant reduction in energy efficiency, due to limescale build-up bunging up the plumbing. Annually, depending on the water hardness measurement, you’ll likely to get a limescale accumulation of up to 1.5mm. This may not sound much, but it’s enough to decrease energy efficiency by as much as 12%. With every passing year, the decline in energy efficiency will increase – meaning your fuel bills will just keep going up.

In contrast, the fuel savings from having a water softener and the reduced capital depreciation on the appliances could be as much as £240 a year. And don’t forget, your boiler won’t be working under nearly as much pressure, so it should work brilliantly for its intended 12 to 15-year lifespan, before you might need to think about a replacement.

How much does it cost to run a water softener?

Although most of the water softeners we fit don’t have many moving parts and are extremely reliable and highly unlikely to break down, there are associated servicing costs. On that front, we would certainly recommend that you have a cost-effective Annual Health Check.

Typically, the only on-going cost you would need to consider is for block salt. This will set you back no more than £2 to £7 per person per month, depending on the capacity and usage of your soft water system.

What is the best water softener for me?

Our market-leading selection of Kinetico, EcoWater and Harvey water softeners are designed to suit all requirements and UK plumbing systems. We can discuss the best option for you, based on your budget and anticipated usage. Our ranges start from £1595 for the premium range and up.

The installation cost is £250 for all models connected to the most common 15-22ml pipework. For 28ml pipework, the price may go up to £450 but this will be assessed when we visit. There’s no need to do a site visit prior to installation – we can do both on the same day. The prices you see on the website are definitive and VAT inclusive.

If you aren’t sure which is the right softener for you, by answering these few short questions you’ll be on the right track. Or call us if you have any questions.

Interested in learning more about a water softener installation in Surrey?