What Type Of Salt Is Suitable For Water Softeners? 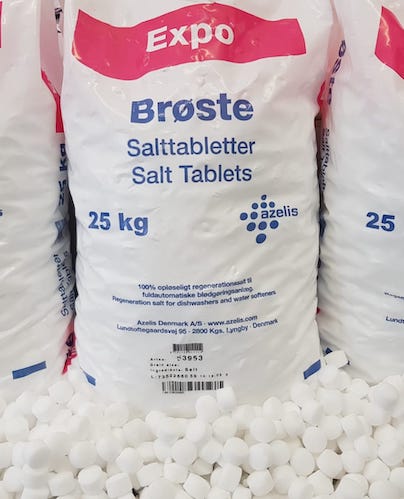 Water softeners would be nothing if it wasn’t for salt! In fact, they wouldn’t work at all! This is because water softeners depend on brine – composed of salt and water – to maintain the resin beads that get rid of the minerals that cause hard water. The healthy maintenance of the beads is known as the regeneration process.

To ensure regeneration works efficiently, whereby sodium ions are pushed through the resin beads, it is essential that the brine tank in your water softener system is regularly topped up with salt. So salt is an absolute essential. But you can’t just use any old salt to keep your water softener properly functioning.

What are the different types of water softener salt?

The salt that is used in water softeners is made from refined, food grade salt and basically comes in three different forms – normally in tablets or blocks but also, but less so, in granular format. To ensure the salt for water softeners is cost-effective and practical to use, it is compacted into one of the different grades mentioned above.

Probably the most common form of water softener salt is readily dissolvable tablet salt, otherwise known as or salt pellets, which is of high purity and prevents sediment build-up in the brine tank.

Since this form of salt contains very little insoluble matter, it tends to be the most expensive, but they significantly cut down on tank cleaning, since bridging or mushing is virtually eliminated. This is the main reason why salt tablets are often preferred in water softening applications. Indeed, certain water softeners, like EcoWater, can only be run using tablet salt, because it is easily dissolved.

The tablets usually come in round tablet form and are typically supplied in 10kg and 25kg bags. When your salt levels need topping up, you simply load the required dose into the water softener.

Block salt is a great alternative to tablet salt and commonly use. It’s called block salt because it is extremely dense, meaning that you get every ounce of use from it, before it needs refilling. Whilst block salt isn’t quite as pure as tablet salt, it is designed for just about all twin cylinder, non-electric water softeners, such as Kinetico, Mini Max and Twin-Tec.  It’s easy to carry, load and store.

Granular water softener salt, sometimes known as granulated salt, is more commonly used in dishwashers these days than modern water softeners. Indeed, if you are running a water softener on granular salt it is likely to be a fairly old model and is probably due for replacement! Granular salt also tends to be used more in commercial and industrial grade softeners rather than in a domestic setting. Like tablet salt, granular salt is typically available in 10kg or 25kg bags.

How much salt will my water softener use?

This will largely depend on the amount of water your household consumes, as well as the level of hardness of your mains water. A typical family of four, for instance, will get through about 300 litres of water a day. On average, this will require a salt top up at least once a month, so it is important to keep a check on the amount of salt you are using. To ensure you always have plenty of supplies, salt for Kinetico, EcoWater and Harvey water softeners can be purchased from our shop.

Can I mix different salts in my brine tank?

Most manufacturers don’t expect you to use exactly the same type of salt throughout the lifetime of the water softener.  So, it is usually OK to mix different types of salt. For certain all-in-one single tank softeners, however, it will be necessary to stick to using salt tablets. But otherwise, you can mix and match between tablets and blocks – despite what the manufacturers might (EcoWater being the exception, where only tablets are suitable – as advised above)

Is any salt OK to use in my softener?

Since the salt you can buy in Tesco or Sainsbury is normally a lot cheaper than the supplies that go into water softeners, it is tempting to assume that you can just buy it off the supermarket shelf. But don’t! Supermarket or convenience store salt, designed for cooking and seasoning your food, is totally unsuitable for your water softener. The reason for this is that the salt crystals in table salt are much smaller than the size of granules required for water softeners and, if emptied into the brine tank, are much more likely to cause damage to the water softener and could even potentially invalidate your warranty.

Can water softener salt be used for cooking?

The salt used in the production of soft water within a water softener is not suitable for cooking or for consumption. It does have other uses, however, such as for sprinkling on the ground to melt snow or ice.

Can the salt bags be recycled?

Given the importance of the environment, we are often asked if you can recycle your salt bags. Because salt is water soluble, it needs to be stored in packaging that keeps it dry. Often this packaging is plastic and not every local authority will accept these bags for recycling. Check with your local recycling plant if they will take bags with the number 4 on the bag. Some do, some don’t. So, recycling can be a “mixed bag”, unfortunately, as there is no definitive answer.

For all your salt enquiries and to ensure you are regularly topped-up with salt supplies, contact SJ Water Softeners, one of the leading water softener companies in the south of England.  Tel 01243 607494 or email: scott@sjbs.info